NINA ON THE SHORT MOVIE SCHWARZFAHRER 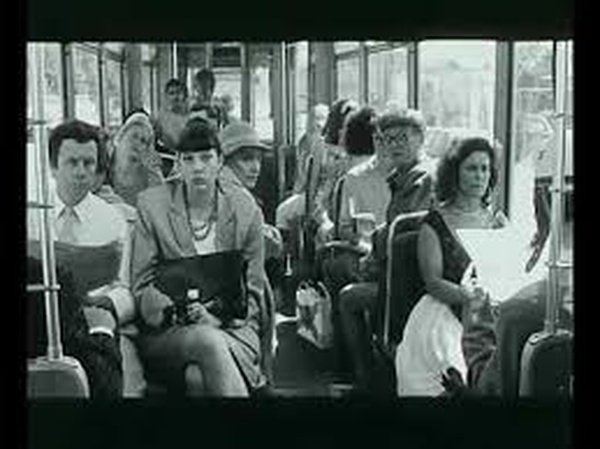 The German word for using public transport without a ticket is ‘Schwarzfahren’, or fare-dodging. Especially in recent times, this term and its racist connotations have been increasingly discussed. For many linguists and cultural studies experts, this is clearly recognisable: Being black, with its many negative connotations such as "moonlighting, seeing black, black Peter" is associatively linked to the image of Africans and people of African descent.

Other scholars do not interpret the term ‘Schwarzfahren’ as racist and refer to the widespread view that it goes back to the Yiddish expression "shvarts", which means poverty.

Pepe Danquart thus seemed far ahead of his time when he made the short film "Schwarzfahrer" (Fare Dodgers) in 1992, which on the one hand playfully explores the term and shows its various levels of meaning. On the other hand, Danquart also presents a form of racism that goes far beyond this term and thus existed and still exists in our society.

Luisa spoke with Nina about her thoughts on the short film, which you can watch here.

Luisa: Nina, you have been teaching our C1 evening course here at Transmitter for a few months now. When we talked about this film a few days ago, you said that you show it in your curriculum as a German teacher in many course formats. What do you think of the film personally, and in which teaching context do you embed it?

Nina: I have already worked with Pepe Danquart's short film at various language levels and have always had a great experience with it. The film is suitable for teaching not only because of its length of 12 minutes, but also because - as you explained in the introduction - it addresses topics that are still relevant today. I usually integrate the film into a teaching sequence on the topics of integration and migration. Even when it is about current political debates in Germany (keyword: AfD, everyday racism and debates about discrimination), the film is a good opportunity to take a look at the topic through a medium other than the textbook. The manuscript for the film is available on the Internet, so that it can read it together during the course and also get a better feeling for the story shown in the film. I would recommend the film for learners at the B1-C1 levels.

Luisa: Why do you think it is important to confront learners of German with the film and its topics?

Nina: I think it is especially important in language courses to raise awareness of how our society ticks, thinks and functions. After all, it should not only be about teaching language, but also about what is happening around us and why. Even if the black and white film released in 1994 seems "old" at first, it is still very easy to discuss together in class whether what we see could also happen today. Soon questions can arise, such as, “Have we made our own experiences with everyday racism and discrimination in Germany? What problems could there be for different social classes and groups? How do we deal with these situations or problems?”

Luisa: What are the reactions to the film?

Nina: At first, the participants usually recognize Berlin – the Berlin of the 90s. The film is followed with attention - this is ensured by the cinematic presentation of the scenery, exciting music and interesting characters - and the punch line usually causes laughter. After the film, the participants can ask many questions, which is very positive for me as a teacher, because I always use the students' questions as a starting point for the productive processing of what I see in class.

Luisa: What other film tips do you have for our students?

Nina: That depends on the age, language level and interests of the participants. The time factor also always plays a role in films in class. When it comes to topics such as racism/migration/problem areas/crime in and around Berlin, there are various films or series such as 4 Blocks, Dogs of Berlin, Gangsterläufer (documentary), Victoria and many more that could be integrated into the classroom.

Luisa: Nina Thank you so much for your view on the movie as a German Teacher. We hope to welcome you back here soon. :)

And for our film lovers, check out Vu's selection of must-see films and TV series or Hanno's favourite picks!