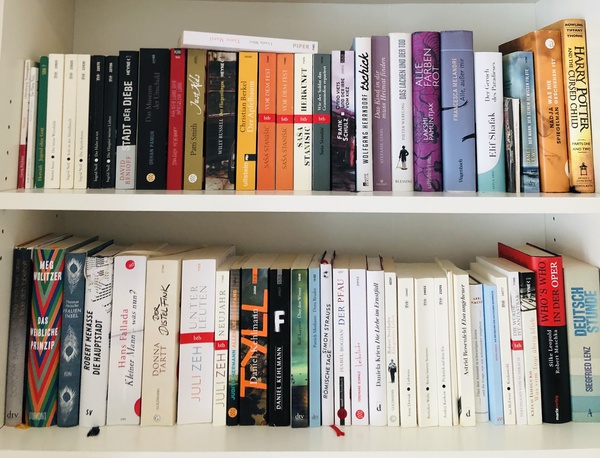 Our team member Laura is not only a wonderful teacher but also a real expert on the topic of the German division and its representation in different media.
Germany as we know it today is just about 30 years old. Accordingly, the division and reunification of the country is present in literature, series, movies or podcasts and many German biographies.

We are very happy that Laura took the time to pick some of her absolute favorites and presents little summaries to give our community the possibility to learn more about this special chapter of German history from different perspectives.

Part 1 of Laura's small series deals with literary phenomena about the GDR.
The works cover quite different genres and topics - some are more autobiographical, others fictional. The books deal with music, the first great love, racism and rebellion in the GDR. But read for yourself what Laura recommends:


Especially in Berlin the german division is still omnipresent despite the reunification over 30 years ago.
Due to it's special role Berlins cityscape is still marked by many places visualizing the seperation of the city, such as the East Side Gallery, the GDR Museum or the Hohenschönhausen Memorial. These places give us insight into life in divided Germany, especially in the GDR. Right now many of these institutions are unfortunately closed at the moment.
In recent years, however, a number of novels, films and series have been published that give an impression of life in the "East" of Germany. Here are a few tips that are aimed more at advanced learners (B2 and above):

- The novels by Thomas Brussig, for example Beste Absichten or Das gibts in keinem Russenfilm.
Brussig has a very humorous way of storytelling and makes life and growing up in the GDR a theme in each of his novels.

In Das gibts in keinem Russenfilm he spins the idea that the fall of the Wall would never have happened and sketches life in a divided Germany in the 1990s. Beste Absichten is about a 1980s GDR indie band that produces music against all odds in times of social and personal change.

- The novels of Grit Poppe, for example Weggesperrt.

Her books are aimed at young readers (ages 14 and up), so they contain a somewhat less complex vocabulary.
Weggesperrt is about 14-year-old Anja, whose mother is arrested and locked away by the Stasi. As a result, Anja is sent to a supervised living institution called "Jugendwerkhof". What she experiences there is described by Grit Poppe in this and the following novel Abgehauen.

It's 1985 in Potsdam: René's mother is dead, his father is in Switzerland and René is alone at home with 1000 "Mark". The novel is about self-discovery, the first love and real friendships. Skizze eines Sommers is a feel-good novel that tells the life of a teenager in the GDR without focussing on the political situation of the GDR.

- Olivia Wenzel's 1000 Serpentinen Angst does not exclusively describe life in the GDR. It's also about home, origin and loss, about racism and sexism, East and West. The novel deals with the growing up as a black child in the 1980s, but also about her mother, who didn't have it easy as a single system rebel in the GDR. All these different themes are skillfully interwoven, so that the novel does not seem overloaded at all.

Thank you for the inspiration, Laura!