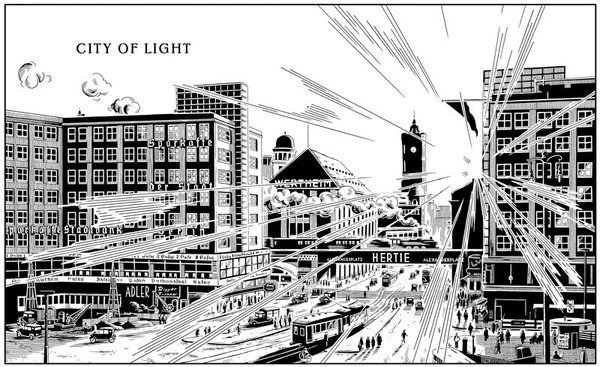 If you're looking for an exciting German read over the holidays, maybe a graphic novel is a good choice!

Graphic novels - or comics - have become quite famous over the past few years. Especially for those starting to learn German, graphic novels offer complex storylines and characters with minimal text, lead by vibrant imagery. The marrying of text and image also supports the understanding of unknown or otherwise confusing vocabulary or grammatical structures.

Berlin itself seems to be a very popular setting for cartoonists and graphic novel authors, especially over the past couple of decades. What's so special about the setting of Berlin? These novels are all set during the 20th century and link personal/biographical experiences with historical events, so if you've ever wondered about what life in Berlin was like during the roaring twenties, the fascist regime, or when Berlin was divided and later reunited, the following pics will give you some interesting insights and share what those days were like from a personal point of view.

Jason Lutes' triology (Berlin: Steinerne Stadt / Berlin: Bleierne Stadt / Berlin: Flirrende Stadt) is a historical novel in images. Set in Berlin from 1928 to 1933, his precisely researched city views create an impressive panoramic milieu study of the time. Lutes presents the story of the student Marthe Müller and the journalist Kurt Severing, during the Weimar republic to the dawn of the Third Reich.

Der Nasse Fisch is another graphic novel set in the 1920s. The adaption of the eponymous novel - which was also the model for the famous German series Babylon Berlin - tells the story of police detective Gereon Rath from Cologne, who discovers Berlin's dark side while solving a crime his father is involved in.

Maus is a graphic novel by American cartoonist Art Spiegelman. Maus depicts Spiegelman interviewing his father about his experiences as a Polish Jew and Holocaust survivor. The graphic novel represents Jewish people as mice, Germans as cats, and Polish people as pigs. The book uses a minimalist drawing style in black and white.

The Berlin-based cartoonist Mawil published two graphic novels about his childhood and teenager years in East Berlin. In Kinderland, we follow Mirko through his everyday life in East Berlin and the historic events of November, 9th 1989.  In Wir können ja Freunde bleiben, the protagonist remembers the stories of his first loves - first in a seperated, then in a newly-reunited Germany.

Various other graphic novels are set in the time of German seperation, and portray especially the Eastern German perseptive. While Mawil's work has a humorous tone and is affected by his personal experineces, the novels Drüben! and Grenzfall have a more extinting and political angle on the time period.

If you're happy to learn about a Berlin from any period of time, Berliner Mythen by Reinhardt Kleist offers many different stories about Berlin's historic epochs or famous people, told by passengers to the taxi driver Ozan.