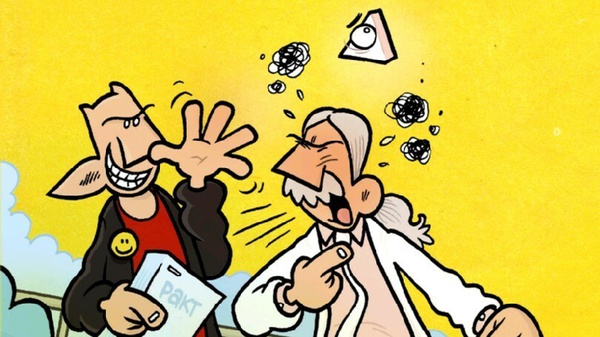 Welcome to the second part of our series regarding graphic novels in German! After our first part of our graphic novels series dealt specifically with graphic novels about Berlin and its eventful history in the 20th century, this article will expand its view to include other titles from the graphic novel scene that are just as exciting and ambitious. Their stories and characters not only convey words, but also captivate the reader, especially on a visual level.

Marjani Satrapi’s series Persepolis (Persepolis: The Story of a Childhood / Persepolis: The Story of a Return) tells, as auto fiction, the story of the author, who lived through the Islamic Revolution in Iran as a child and was finally exiled to Austria by her parents. There, Satrapi is confronted by big cultural differences and by the search for her own identity. The Persepolis series was published in France in 2000, and later released as a comic-style film in 2007.

German-language literary classics from various eras have also been reissued as graphic novels. The illustrator Flix, for example, tried his hand at Goethe’s Faust: the background story of the rivalry between God and Mephisto has remained, but Heinrich Faust is a student of many subject, jack of all trades and a taxi driver in Berlin. As such, the graphic novel contains the complete story, albeit in a revised form.

Somewhat gloomier - and thus also remaining true to the tone of the original - is the comic adaptation of Franz Kafka’s Metamorphosis. Eric Corbeyran and Richard Horne have adapted this equally famous and timeless classic of Austrian literature as a graphic novel. The narrative adheres closely to Kafka's original text, and the drawings illustrate his sad metaphor on the essence of humanity in an atmospheric and innovative manner.

German history can also be retraced beyond the Berlin context in graphic novels - for example, in Peer Meters and Barbara Yelin's comic novel Gift about Gesche Gottfried, Germany's first known poisoner. Gottfried poisoned fifteen people - including her husbands, her parents and her children - between 1813 and 1827. Meter and Yelin took up this story and tell, from the perspective of a young writer, the fate of Gesche Gottfried and the circumstances to which women were subjected in the 19th century.

The graphic novels The Diary of Anne Frank; Graphic Diary by Ari Folman and David Polonsky and Sophie Scholl; The Comic Biography by Heiner Lünstedt and Ingrid Sabisch tell the stories of German fascism and the cruelty of the Third Reich from the perspective of two girls who were both victims of National Socialism.

For those of you who'd like to try out some "Easy Reader books" made especially for German learners, feel free to check out our post on simplified texts for beginners. Feel encouraged to rummage in the online libraries to find something  suitable for your taste!