GET TO KNOW OUR STUDENTS: JON 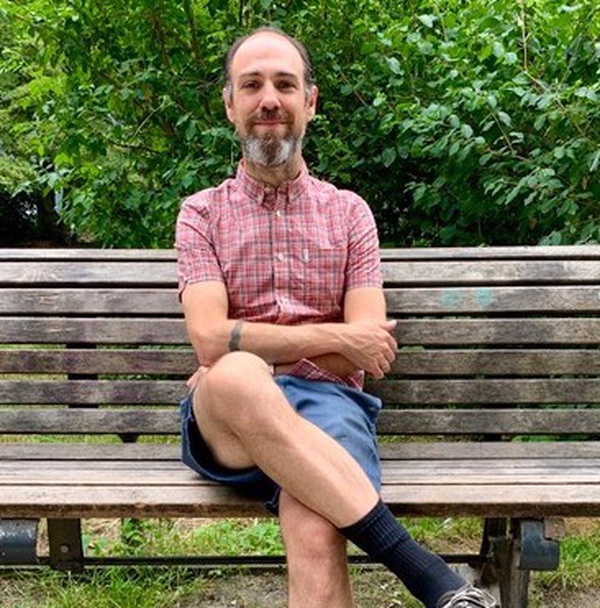 Finally continuing with our Students of Transmitter series, we asked Jon, who is currently in Luisa's B1.1 course, a few questions to get to know him better. As a newer resident of Berlin he has an interesting perspective on the city mostly knowing Berlin during "lockdown". Also Jon enriched our courses by composing songs and editing video clips on some course topics. Listen to "Ohne Geld" and  "Trotzdem Trott" here and read on below!

Transmitter: Jon, we already know each other from the A2.1 course in April and the A2.2 course in May. Can you briefly introduce yourself?


Jon: Hi, my name is Jon Davies and I grew up in the state of Pennsylvania in the United States. From 2005-2020 I lived in New York City and played music, worked in a restaurant, helped start a recording studio, did “Man-with-a-Van” jobs, toured around the US with bands and had a great time on the whole. A little of everything. I still have a lot of very good friends who live in New York.

T: You told us in our A2.1 course in April that you are still completely new in Berlin. A special time for a 'fresh start' here. What brings you to Berlin? And how do you experience the situation and the city right now?


J: I got married about six months ago and then moved here to be with my wife who has lived in Berlin for 8 years. Even though I’d visited Berlin for two weeks last summer, I didn’t quite know what to expect before moving and I think that COVID-19 has made it even more difficult to have a plan. It seems like a lot of things are up in the air and I’m nervous about finding a job. I really enjoy our little corner of the city though. Compared to New York, especially with the pandemic, Berlin strikes me as very peaceful and positive. I feel lucky to have made it over here in March when I did. I think I must have been the only non-German on the airplane. Everyone else was trying to get back home from vacation before their flights got cancelled.

T: What do you think are the biggest changes in the city right now? And with what feeling do you look at your homecountry?


J. Because of the virus and a lot of areas and businesses being closed, I think I’ve had a very narrow picture of Berlin so far. It’s hard for me to say what’s changed because I don’t have a very good idea of what the city is like normally. From watching the news though, it seems like the majority of people here have a much more mature approach and outlook right now. I’ve never been 100% comfortable with the US’s ego but I think being now on the outside looking in, I can fully realize how insane the last few years have been there. I’m really glad to be in Berlin but at the same time I wish all the rest of my friends and family could come over here too.

T: In our last course you composed a song and made a music video! One of our perhaps not so exciting topics was money and you dealt with it in such a wonderfully creative way. The other course participants and I were very pleased about this. Are you planning more songs or maybe even a bigger format? And how does music help you learn the language?


J: Yes! I think I was partially inspired by some of the German music videos you showed the class in our A2.1 and A2.2 courses. If I end up making more, I’ll put them here when they’re finished. https://www.youtube.com/playlist?list=PLwBhG9XLgDVaatWBjeTnzBmPZ73N360q0
Music is a great way to solidify memories and I think it’s probably very helpful in learning a new language. You get phrases stuck in your head and even if you can’t translate them as you hear them, you know the sounds of the words and will come to naturally internalize their meaning too. I’ve been into writing songs since I was a kid and I probably always will be. I’d love to translate that into a career somehow but it’s tricky. Trying to write lyrics in German seemed like a fun challenge since I’m still learning the language, but taking courses at Transmitter has really helped me with confidence.
It may sound like I’m being paid to say this but I’m not! Moving to a city where you only know one or two people can be daunting in itself. Add a pandemic and a foreign language to that and its downright disorienting. I really believe that your efficient but friendly teaching approach has helped me to relax, learn a lot in a relatively short time and feel like it is possible for me to belong in Berlin. The variety of students and their backgrounds at Transmitter is astounding. I feel lucky to be able to interact with and get to know so many different people. Aller Anfang ist schwer but mine has been made way less schwer by getting involved here!


T: Thanks a lot Jon for the great compliment and your motivated participation throughout the last courses siwtching to online and back again. Your songs enrich our course very much and we are looking forward to the next one! It's a pleasure to have you at Transmitter. :)
♥ Share on Facebook ♥